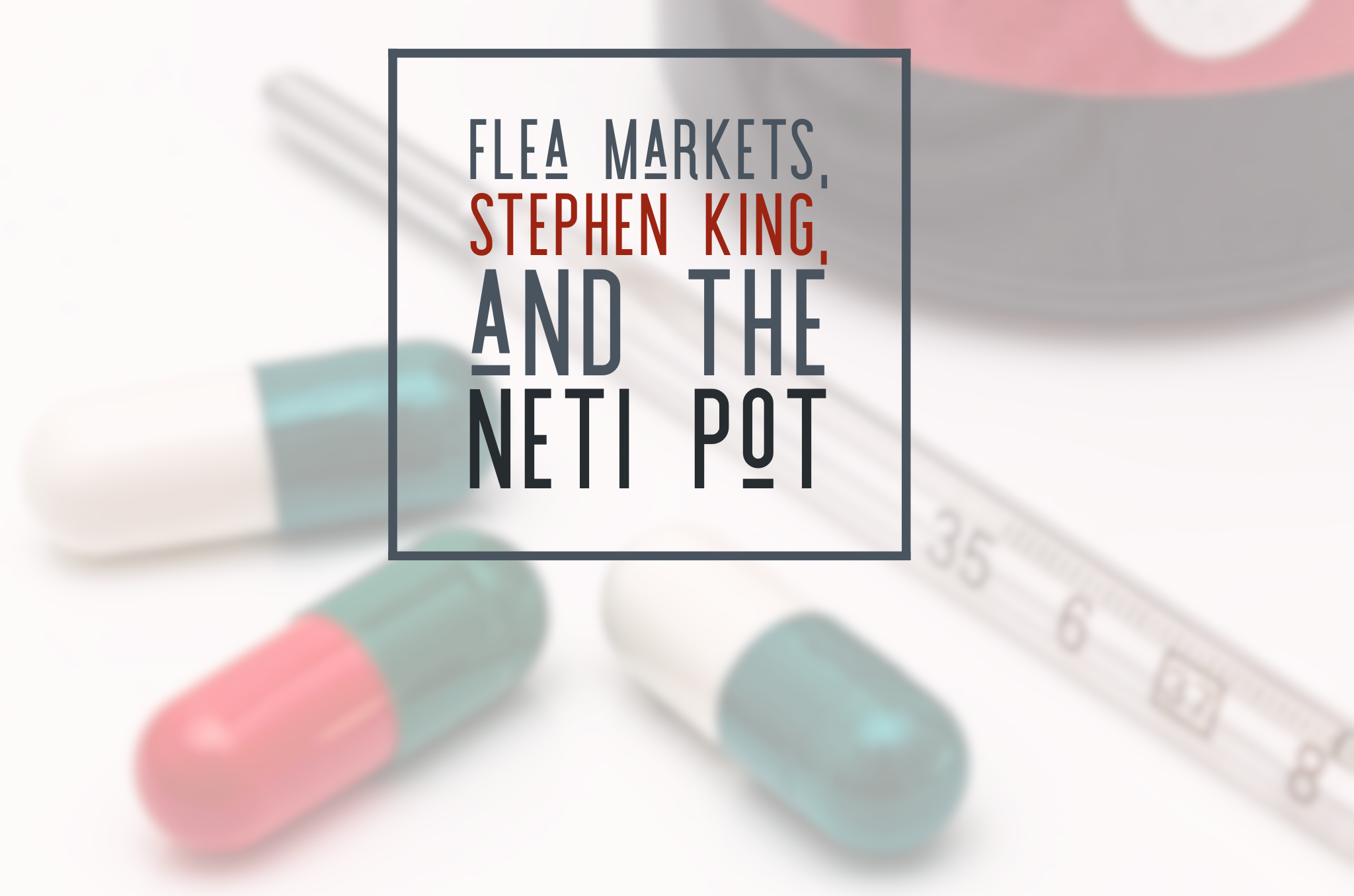 This blog was originally posted on February 8, 2010, and as I’ve gone through craziness with my sinuses lately, I remembered that it was 8 years ago that my sinuses issues took a turn. I love how blogging allows you to relive moments that may have been forgotten years later. Enjoy.

So I’ve been hanging out a Flea Markets helping out my mom and they are very interesting places. It’s like one step up from a city street shell game and one step below a yard sale. It’s a Haven of Hussle. Everyone is trying to sell something to other people that have no value to themselves… or they would keep it. Not too many people sell “new” items at a flea market so the items have already been pretty well handled. Just checking out things at the flea market makes me one of the handlers. Because of Stephen King, this concerns me. Yes, THAT Stephen King… the author. Let me explain.

There are some things you never forget. I will remember, vividly, the first time I read THE STAND by Stephen King. It was about 15 years ago and I was reading it at home… alone… in the middle of the night. There was one chapter at the beginning that stands out because it terrified me and made me more aware of how disease and germs pass between people than any college science class ever did.

In a nutshell, the story is about some new, highly communicable disease, and one person that has it goes to a gas station. He pumps gas,  goes in the station and pays. Then every other person who used that gas pump or touched the counter or received money back as change (and so on) also got this disease. That story made me look at people and germs so differently. Not in a psychotic, full-tilt germaphobe sort of way, just more aware of people around me.

Apparently, this was lost on me for a while because I came home from the flea market last week and I was very tired. Then on Monday, it took all the strength I had to get out of bed and even more effort to do the show that night. Tuesday began the Nasal War. It was an all-out battle between my nostrils. Only one wanted to work at a time no matter how much NyQuil, DayQuil, or any other Quil I tried. As a nose breather, I was frustrated. Then the worst of it came. Neither nostril worked. All I could think of in my haze of cold medicine and stuffiness is Stephen King. How could I have been so foolish? Public places are teeming with bacteria!

By Friday I could no longer handle it. There was only one thing I haven’t tried. It’s been in the upstairs bathroom since last year. The thought sickened me. But it was my only clear thought.

Jeff’s son purchased one last year when we moved here to Pollen Land and only used it once. He said it helped but he didn’t want to use it again. I had never heard of a Neti Pot so I was curious. It looks like a tea kettle and you use it with a saline solution to clear your sinuses. I was still interested until I saw the diagram on the box. Apparently, you are supposed to take this tea kettle and put the spout in one nostril and it will fill your sinus and DRAIN OUT THE OTHER NOSTRIL.

Um… ARE YOU SERIOUS?? No thanks.

Now, nearly a year later I find my thoughts being consumed by the Neti Pot which brings me to Saturday. I am at the worst of the cold. My mouth feels like it’s filled with cotton from breathing through it all week. I’m exhausted but I’ve been too tired to even move and I can’t take it anymore. I go upstairs and get it. At first, I stare at the Neti Pot. As I read the instructions I’m thankful we already have distilled water from my daughter’s humidifier. As I fill the kettle I wonder if I will feel like I’m drowning or if complete nastiness will come out or if something is inhabiting my nasal cavity. Then I don’t care anymore I just want to breathe.

I tilt the kettle and I feel the saline solution go in my nose. I’m surprised that I don’t feel anything but the warmth of the water. No drowning, no panic, no nastiness and more importantly nothing living in my nose. As the drip starts from the other nostril I am amazed. Then it turns from a drip to a flow and it feels like pressure being released from my head.

One the treatment is over I wipe my nose and inhale. It’s amazing. I can breathe through both nostrils. There’s no pressure behind my eyes. I feel like a new woman. I inhale again and it was like a sunny day. I went back into my room and got into bed and relished what full nasal breaths feel like. I will never take it for granted again.

I went to the flea market on Sunday a new woman! I watched a kid licking cotton candy off of her fingers and then touched something on a table. I saw a woman walk out of the bathroom without washing her hands. I saw a man put his credit card in his mouth then after he paid placed it under his arm… he was wearing a sleeveless shirt. Remembering Stephen King and my inability to breathe without Neti Intervention, I slathered on hand sanitizer and went back to business.