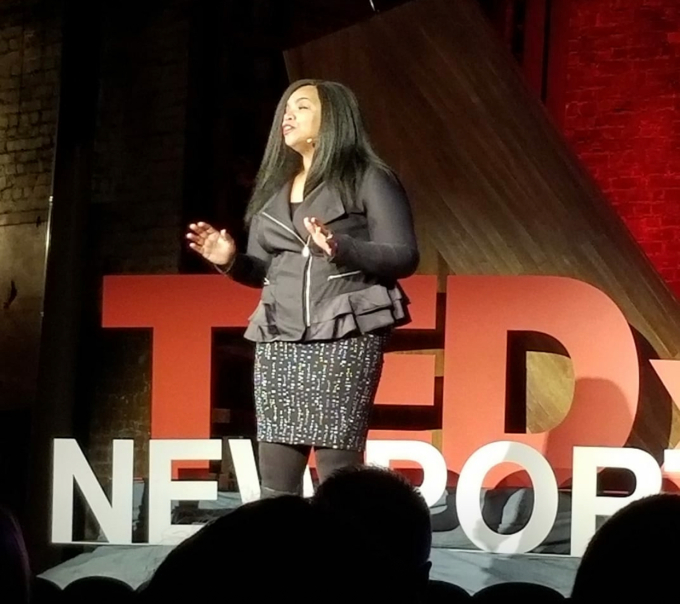 What a blessing and a privilege to speak at a TEDx event.

In 2015, I wrote in my journal that I wanted to speak at TED one day. The TED Conference is held annually in British Columbia, Canada where incredible speakers from around the globe share “ideas worth spreading.” After watching mathematician Margaret Wertheim’s 2009 talk The Beautiful Math of Coral a million times about hyperbolic math and crotchet I was hooked (see what I did there?). If you aren’t familiar with TED you can find information here: TED

TED started the TEDx program in 2009. This was where communities can put together events similar to TED but be completely independent of the main TED. The licensing requirements are exacting because they want to maintain the integrity of their product even with these independently produced community events.

I read internet news daily and I happened to catch that TEDxNewport was casting for 2018. I remembered watching a few of the talks from their 2016 event. I have a story to tell but is it the right story? Will it resonate? Then I saw the theme: CAPSIZED and I knew that I had to go for it.  When I cleared the first round and they needed more information it was a little easier. I was able to refine what I wanted to share – my idea worth spreading. It was exciting going through the process.

Around Christmas I was asked to provide a two minute video that showcased who I am as a person. The goal was to be easy and casual and show your personality. Since my chihuahua Sid Vicious cannot keep quiet for too long I held him in the video and spoke a little about myself and what my goals were with my TEDx talk.

The waiting to see if I made seemed like forever but it was only a couple of weeks. When I found out I made it I was so excited… until I saw the other speakers. I was struck with an instant bout of the I’m Not Worthy’s. It seemed like everyone was a doctor, lawyer, or advanced degreed scientist followed by published authors, foundation creators, and famous educators and historians.

Did I get the wrong email?

When we all met for the first time there was an immediate kinship with everyone. It was almost like we knew we were entering an arena together that will be very special and unique. We all had different stories to tell and our ideas – although wildly different – needed to be told. They were definitely ideas worth spreading.

The next 9 weeks were filled with speaker rehearsals and speech development. We worked with an incredible speaking coach who provided valuable insight and guidance. Then interviews and photo shoots and even a massive storm that knocked out trees on my way to Newport for rehearsal.

I consider myself a heart speaker. I draft an outline and speak from my heart through my outline. I’m not so much of a speech writer, per se. For TEDx I had to be a speech writer. I feared that I would come across as stiff or rehearsed. I also have a complete lack of timing that I had to pay close attention because TED does NOT play with time! I learned so much about myself and my abilities during this time. I can write a speech. I can still speak from my heart with my words. It took a lot of practice, a lot of filming myself, and learning what part of a story can be trimmed but still maintain the soul and the goal. It was definitely a process that will benefit every future speech I ever write.

TEDxNewport was on March 10, 2018, at the sold out Jane Pickens Theater. As we did our final prep for the stage I remember looking outside over an hour before doors were to open and there was a line down the street of people waiting to get in. It was amazing. Tickets were close to sold out before the speakers were even announced. Some of my quick acting friends got tickets and others were tuned in on the live feeds.

When it was my turn I took a deep breath and walked to the stage to stand on the famous TED red carpet and shared my story about radical self love. The lights were strong and I couldn’t see but a handful of people in the audience so I couldn’t tell if they were engaged.  I just laid it all out there like an athlete on the field. I gave it my all.

After the show so many people came up to me and told me how my talk affected them. They shared their struggles or the struggles of a loved one. People told me about how their friend had weight loss surgery and they thought it was the easy way out at first but after seeing what their friend went through that they understood that it’s not easy at all.

It resonated. People understood. I was humbled by all the kind words and comments. Each speaker shared their stories and I learned and grew with each one. It was the most amazing experience. Running a TEDx event is no small feat. It takes a village of talented people working in every possible discipline to put it together. Shout out to the entire team of TEDxNewport volunteers and staff because this event was outstanding from start to finish. I look forward to volunteering for the 2019 event.

Please take some time to listen to the other amazing speakers that day. The full TEDxNewport Playlist is on the TEDx YouTube Channel. Watch. Love. Share.

This didn’t tick the box of TED Speaker from my journal in 2015, but this was definitely the best possible place to start!